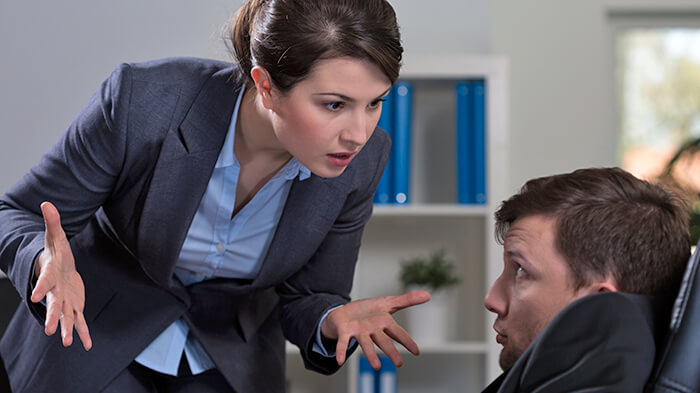 Workplace bullying is a serious problem—as much as sexual harassment and racial discrimination—that has reached, in these times of economics-fueled stress, near epidemic proportions. In 1999, a report from the International Labour Organization named physical and emotional violence among the most serious issues the workplace faces. Varying sources cite prevalence rates as between one in five and one in three.

And things may be on the further decline. According to a Weber Shandwick poll from the summer, 65% of Americans point to lack of civility as a major problem in their country that has only gotten worse with the financial crisis and recession.

Workplace bullying is a threat to our collective productivity, our sense of personal safety, our spiritual well-being.

In bullying, one person holds unnatural sway over another, the former humiliating the latter through intimidation and excessive efforts to control. The Canadian Centre for Occupational Health and Safety defines workplace bullying as “acts or verbal comments that could mentally hurt or isolate a person in the workplace.” It usually involves repeated episodes designed to “intimidate, offend, degrade or humiliate,” and it can get physical. Examples of bullying include spreading rumors, excluding others socially and undermining another’s work.

Precious little occupational health and safety legislation currently protects Canadians against bullies. Saskatchewan leads the country on this front with a 2007amendment to the definition of “harassment” in its Occupational Health and Safety Act that includes workplace bullying. In Quebec, lawmakers file “psychological harassment” under the provincial Act Respecting Labour Standards.

And in Ontario, where Bill 168 became law this past June, workplaces with more than five regular employees are now obliged to develop written policies around bullying, to review them annually and to conduct training on them.

Beyond these flimsy protection nets, however, there’s precious little to mitigate an individual’s exposure to bullying on the job.

According to the CCOHS’s Violence in the Workplace Prevention Guide, if you feel you’re being bullied, you need to confront the jerk and insist it stop. If doing that on your own is uncomfortable, ask a superior to come along. If the stuff keeps up, start a journal of bullying incidents and hold onto any written material you’ve received from your persecutor. Finally, report the harassment to whatever supervisor you feel will be the most responsive to your plight.

There is no more place for bullying in the workplace than there is in the schoolyard. Wherever they show up, bullies must be shaken down from the monkeybars.