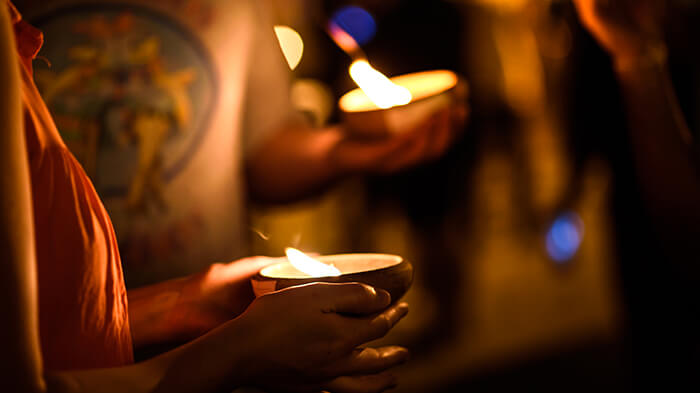 That religion and spirituality are two distinct beasts is fairly well understood now. The former carries with it the whiff of rules and structure, expectation and punishment; the latter is considerably more freeform, and open to as much speculation as anyone can throw at it. But sometimes efforts to simplify such distinctions thus, only serve to further complicate the whole sodden scene.

It was with this perspective in mind that author Shirley Scott tackled the subject in her new book, Religion vs. Spirituality — One Psychic’s Point of View.

Inside such big-topic chapter titles as “Life” and “What we discover when we die,” Scott seeks to untangle the ever-more-layered subject from the angle of a clairvoyant. It’s a view in from an unexpected place, to be sure, but a valuable one for the stripped-down insight it offers an audience.

“Religion is like a club or a group,” Scott says. “If you don’t believe like the rest of the group, you can’t be in that group. Spirituality, however, is a way of living and knowing that everyone else is here living their life and they don’t have to believe like you do to be your friend or in your life.”

What’s more, the rules that govern organized religion are the product of our own invention. It was man, the author points out, who assigned the right- and wrongness labels to our behavior. And it was man who outlined the ultimate punishments to which the lot of us are subject if we take a step wrong.

“The concept of being born in sin doesn’t make sense to me,” Scott says. “If we are part of a perfect God, and we are considered his children whom he loves with unconditional love, why would he want us to be born in sin and have to suffer all our lives? No parent wants that for their children.”

Often, she says, religion makes us feel dirty, isolated and ashamed. Its efforts to control us create feelings of guilt and disappointment — not, scoffs Scott, “what we are here to experience.”

And so enter spirituality, a big, generous approach to life whose laws are dictated, says Scott, by the constraints of the universe alone.

Where sin “makes life more complicated,” forever encouraging us to question our actions and ponder whether they’re sinful for being different from everyone else, karma says do what you want just so long as you remember that you’ll get it back. “It’s very clear and we don’t have to question our thoughts or actions,” Scott says in her book. “We know right from the start what is going to happen to us. It can happen behind closed doors, too. You don’t have to tell anyone what you did or didn’t do. The universe knows what energy you put out or didn’t put out and the intent behind it. It will bring back whatever you put out even if no one else knows about it.”

Ultimately, Scott’s aim is to encourage people to contemplate their belief systems, and to determine if they’re “eating” or “feeding” them. Above all, says Scott, an animal communicator and clairvoyant who’s studied the difference between religion and spirituality for two decades, people need to keep it simple. No belief system, she stresses, should be too complicated.