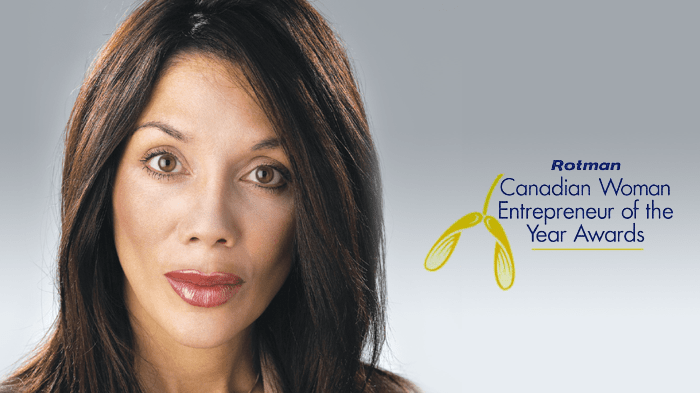 TORONTO, November 23, 2000 — The Canadian Woman Entrepreneur of the Year Awards 2000 recipients were announced tonight in Toronto during a dinner and awards ceremony. The Awards are an annual initiative of the Joseph L. Rotman School of Management, University of Toronto.

“As a leading business school, we are proud to acknowledge the creativity, innovation and successes of these outstanding women, who have contributed so much to their communities and to Canada,” said Rotman School Dean, Roger Martin. “Through their vision and achievement, they have not only brought strength and vitality to Canada’s entrepreneurial sector, they have contributed in important ways to the growth and strengthening of our economy.”

The Canadian Woman Entrepreneur of the Year Awards 2000 recipients in the five categories are:

Jane Tattersall is one of Canada’s premier post-production professionals. Her company, Tattersall Sound, was founded in 1992 and is home to twenty-four award-winning sound editors and supervisors who add the dimension of sound that enhances the audience’s enjoyment of films and television series. Her film credits include American Psycho, Ginger Snaps, In Too Deep, Sunshine, 32 Short Films About Glenn Gould, Naked Lunch and The Fly. Her several dozen television credits include DaVinci’s Inquest, Saturday Night Live and Jett Jackson for Disney. Earlier this year, Jane merged her company with Casablanca Sound and Picture to form Tattersall Casablanca, making her responsible for one of the largest facilities of its kind in North America. Growth plans include increasing the exposure of Tattersall Casablanca in the U.S. film and television markets. Jane hopes that Toronto will become an important centre for post-production, just as it has for film shooting.

Kidzpace Interactive is a manufacturer of electronic interactive entertainment kiosks for commercial and institutional use. These unique kid-friendly and child-proof designs house world class electronic game technology from manufacturers such as Sony, Nintendo and Sega, as well as educational PC-based computer systems. Trained as a fashion designer, Linda spent a number of years in retail management before starting a succession of her own businesses. The opening of Sega Canada in 1993 sent Linda in an entirely new direction. She and her husband, Rob, began integrating various electronic parts into specially designed cabinetry for institutional use. Customers include hospitals, dental and medical clinics, car dealerships and fitness institutes. Products are shipped throughout North America, South America, Europe, and the Middle East. Recently, Kidzpace was given approval to sell its products to the 27,000 McDonald’s Restaurants worldwide.

In the mid-eighties, Dianne and her partner identified a need in the architectural community for shaped windows. Vinyl windows were relatively new and no one in North America was bending vinyl. When they attended their first trade show, curiosity turned to enthusiasm as other window manufacturers saw the potential for the new product. With orders in hand, they began to develop their own designs, equipment, manufacturing processes and business systems. Recently, Round Top has received a US patent for a do-it-yourself glass block construction kit for use by homeowners to build free standing walls, shower enclosures, movable kitchen islands with no mortar or caulking required. With sales increasing by 40% in 1999 and similar forecasts for the future, one of Dianne’s challenges is developing their workforce. Through an in-house mentoring system, new staff members are paired with experienced people. Their craftspeople each serve one management shift per month to hone their skills as managers of the future.

In August of 1996, Medicard Finance Inc. (Medicard) was formed to offer financing to persons seeking elective medical procedures. At the time there was a growing demand for reconstructive surgery, laser eye treatments, skin resurfacing, cosmetic dentistry and other procedures not covered by the public health care system. Ann Kaplan saw an opportunity to exploit a growing elective surgery market and an opening to step into finance procedures where the government was cutting back. By December 1997, legal and licensing requirements had been met and physicians were registering for the program. Medicard is now the largest medical finance company in Canada with over 3,500 plastic, reconstructive and dental physicians registered with the company to offer financing to their patients.

In 1972, at the age of twenty-six, with no formal training and a thousand dollars in the bank, Gloria Parsons built three houses in Grand Falls, Newfoundland. Over the next fifteen years, she turned a “sort of a hobby” into a major construction company that has generated millions of dollars for the Newfoundland economy. The single family homes, townhouses, condominiums and apartments that she has built in Central Newfoundland and St. John’s have set a standard for creativity and innovation in the construction industry that is unsurpassed. In 1992, Gloria took the initiative and responded to the growing concern for the quality of senior care in Newfoundland and Labrador by constructing the Chancellor Park Complex. What began as a 70-bed retirement home, evolved into the only privately-owned fully accredited long term/continuing care facility in Newfoundland that provides a continuum of care and service to the elderly in a safe, supportive home environment.

The 2001 call for nominations begins on November 24, 2000. For more information please visit the CWEYA Web site at cweya.com.