It might shock you, but face lifting is in 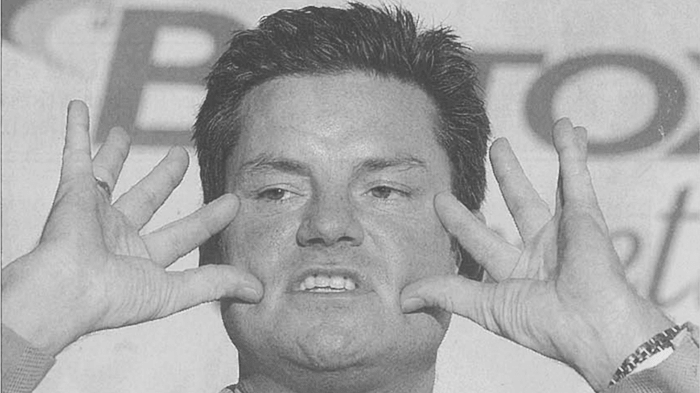 People are turning in droves to non-surgical face lifting techniques, including one that involves passing enough current to run a table saw through your face.

The muscle on one side of my forehead spasms, out of my control, pulling my brow up. It feels like someone has grabbed a wad of my hair and given it a hard yank.

Dawn Sinclair, an esthetician at SpaMedica, a cosmetic surgery and skin care clinic in Toronto, is sending about 18 milliamps of electricity into targeted areas of my face. She keeps the dose low because I’m a novice to the procedure. On regular patients she’d go as high as 100 milliamps, she says. That’s enough to power a table saw.

I willingly endure these electric shock treatments because they’re a component of the PanG, one of the newest procedures in a growing arsenal of non-surgical facelift options.

The quest for eternal youth and beauty has never been greater. Cosmetic plastic surgery procedures have tripled in the past decade, according to the American Society of Plastic Surgeons. In 2000, 5.7-million procedures were performed in the U.S. And vanity, thy name is no longer woman. About one-quarter of those seeking enhancement are men, a number that has increased 80 per cent since 1992. Leading the cosmetic way are liposuction and breast augmentation, followed by eyelid surgery and facelifts. But gaining in popularity are the so-called non-surgical procedures and injectibles such as botox.

Although more and more men and women in their 20s are tampering with Mother Nature, baby boomers account for more than 40 per cent of all procedures done.

“These are self-actualized individuals who created health and fitness clubs to feel good,” explains Dr. Stephen Mulholland, the director of SpaMedica. “Now they feel good, but they look in the mirror and suddenly they think they look old. Whereas an older generation might have accepted this as fate, a large proportion of boomers view the procedures that have been developed as acceptable means to self-actualize.”

Plastic surgery is hitting the mainstream. Suddenly it’s okay to talk about it and it’s okay to admit to it. “It’s no longer a vanity thing, something you have to hide,” says Dr. Frank Beninger of The Beresford Clinic in Toronto. “Society puts a lot of pressure on people to look their best.”

The growing interest in cosmetic surgery this year spawned a new consumer show. New You: The Canadian Cosmetic Enhancement, Anti-aging Show covered 65,000 square feet of the Metro Toronto Convention Centre in January and featured some of the top cosmetic surgeons, dermatologists and dentists in Canada. More than 12,000 people attended the two-and-a-half day event. Non-surgical seminars and demonstrations drew the most crowds. A mob scene greeted Mulholland before the start of his PanG lecture. Women had begun to line up more than half-an-hour early hoping to get in without a ticket; the lecture had long been sold out. Several tried to barrel past the mild-mannered woman manning the door. Others insisted on seats. In the end, people stood three-deep in the back.

Mulholland wasn’t too surprised by the reaction. He spent four years developing the PanG because demand for non-surgical facelift options was so high at his clinic.

“I had many clients who would sit through discussions about surgery with great interest. But, in the end, they’d say one of three things: ‘That’s great, but I don’t have two or three weeks to recover; do you have something less expensive?’ and ‘Is there anything short of a knife – with no risk – that can make a difference to my drooping, falling face?”‘

The PanG sounds like a miracle cure. The name stands for pangerminal. Pan is a Greek word that means all-encompassing, and the G stands for germinal, which refers to all the living cells that make up the face. Comprised of five separate procedures to treat the epidermis (outer layer of the skin), dermis (undercarpet of the skin), and the muscle, it lifts and revitalizes the face without surgery – and with little risk over two one-hour visits a week in a consecutive 10-week period. “It’s like joining Bally’s Facial Fitness,” says Mulholland.

A basic treatment package starts with “sonic peels.” Unlike traditional heavy-duty chemical peels that burn off the outer layer of the skin, leaving redness and weeping, the sonic peel uses ultrasound energy and a dull spatula-like blade vibrating-30,000 times a second to lift off crusty, dead skin cells. It doesn’t hurt and after a sonic peel, you immediately walk out with fresh, glowing skin. For areas with acne sears and more irregularity, Mulholland uses “crystal peels,” in which streams of tiny crystals gently peel away dead skin. They’re followed by a “sonofacial,” which drives skin care products deep into the skin, increasing collagen content and decreasing pore size.

Next are the “myofacials” – electric pulse stimulation that strengthens muscles – to lift the brow, cheek and jowls. Unlike the weak electric machines available on infomercials, the myofacial unit packs more power and doesn’t squeeze the face, creating more wrinkles. While the muscles are being stimulated and pulled up by the electric pulse, elastic-like bands provide tension and pull muscles down, like the weights on a dumbbell. Also included are botox injections to smooth and relax the muscles that cause wrinkles, and fillers such as Artecoll. Restylane and Hylaform to plump up fallen areas.

The cost of the basic package is $2,999, plus another $2,200 for a myofacial mainteqance unit to continue toning the muscles at home. Add another $1,000, and you can get a “photofacial.” Co-developed by Mulholland, this intense pulsed-light treatment gives a more even tone to the skin by reducing discoloration from rosacea, spider veins or sun damage.

If a facelift takes 10 or 15 years off your page, the PanG will only take off about five. It offers subtle changes, not dramatic ones. And because the procedure is so new, Mulholland is not sure how long the results will last. However, using the home unit should offer long-term improvement. But unlike a surgical facelift, which requires about three weeks recovery time, after a lunchtime PanG session, patients can apply makeup and go.

Not everyone is a candidate. It works best on people 35 to 55, Mulholland says, before the muscle separates from the skin. And it can be used by those with pacemakers or untreated cataracts.
However, not everyone’s a convert. Some of Toronto’s top plastic surgeons are reserving judgment. Dr. Trevor Brown who has a practice at the Toronto Institute of Aesthetic Plastic Surgery, believes the PanG program is an excellent marketing concept, but he is not convinced it works.

“I don’t want to appear negative,” he says. “Dr. Mulholland does great work and he’s very forward in his thinking but it hasn’t been demonstrated in a paper. I need to see more evidence that putting electrodes on your face does anything.” The Beresford’s Beniger agrees. “It needs to be peer-reviewed, with an unbiased study and adequate follow-up,” he says.
Still, it’s only a matter of time before the PanG becomes popular, as proven by the barrage of non-surgical treatments and procedures that have come before it.

Botox, an injection made from botulism toxin that temporarily relaxes muscles that cause crow’s feet and furrow lines, was used extensively by ophtalmologists to treat conditions such as eye twitches before it was introduced to the cosmetic community and approved for cosmetic use. Now it is being widely used, not just by celebrities such as Fashion Television host Jeanne Beker and Designer Guys hosts Chris Hyndeman and Steven Sabados, but by average, middle-class twenty-and thirtysomethings hoping to keep wrinkles at bay. At about $400 a shot every three to six months, it only costs about $25 a week.

“Someone doesn’t have to be wealthy to afford these treatments,” says Dr. Fred Weksberg, a cosmetic dermatologist in private practice in Toronto.

Growing old appears to be a thing of the past. Facial renos are becoming as common as working out at the gym. It’s not about looking “done,” it’s about looking young for your age. I’ve never been interested in plastic surgery, but with everyone doing it, the peer pressure is on. And after one myofacial and sonic peel session my disinterest is wavering. The treatments left my skin vibrant and glowing and put me on the receiving end of several compliments. That might be worth a few zaps and hair pulling. If we cap turn back time, why not?