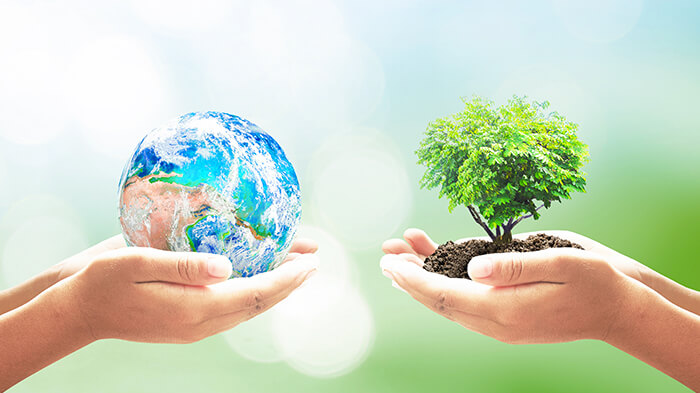 It’s a sobering message, particularly for the folks who occupy the modern workplace, where trees are the long-forgotten starting points of the fluttery cascade of official business that towers around them all the livelong day, the reams of worthy drudgery whose ink-splotched commentary lubricates all manner of commerce in this, the progressive world. And whose wheeling pursuit of profit is the very life blood that drives it onward, sending those same reams of ink-splotched commentary scattering with their efforts.

But it is always meaningful to reflect on the provenance of the artifacts that facilitate the continued existence of our modern corporate lives, and to reflect on at what price—sustainability or spirituality—they strip us most bare.

That sustainability and spirituality share some common, gossamer threads is a no-brainer. In their broadest definitions, both dwell in the realm of earth love, the former more practically resident than the latter. The sustainability movement, much in favor of late, speaks of using only those worldly resources that are grown, shipped, processed and prepared in a way that doesn’t deplete the natural environment. Bandy about this term in any corporate circles today, and expect to be met with sage nods, importantly endorsing your commendable understanding of a serious topic.

Spirituality, meanwhile, enjoys an existence as a more amorphously understood term, bowing under the weight of a thousand definitions, each more freighted with personal interpretation than the one that came before. It is, at last, a generous explanation for a nebulous link that binds humanity with those mysterious forces that give it grounding in the earth; that provides it with some measure of satisfying explanation for the miracle that is one more mundane day.

And it is in the intersection of the two ideological forces that the really good stuff lives. Here, our efforts to remember grace and to express graciousness powerfully reside. It is here that the looming spectre of global warming invites us to focus inwards on what personal roles we’ve played in delivering this fiercesome beast to our midst. It is here that we must reconcile our singular activities, undertaken with personal spiritual purpose, with the impact of their concentric circles on the greater universe.

A spiritual person is, at best, in tune with nature. And when nature flags, so, too, do we.