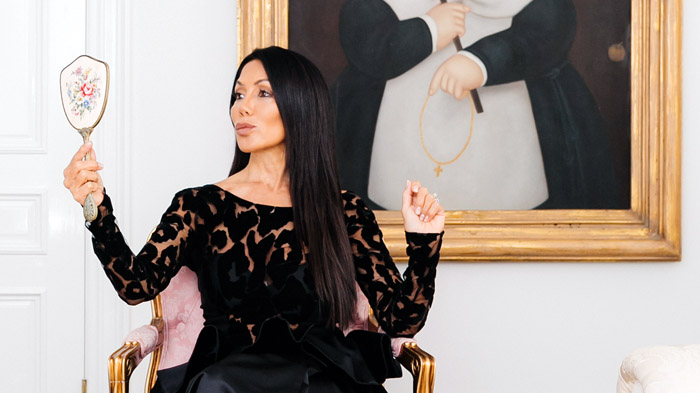 Have you ever wanted to get an inside scoop on the life of a Real Housewife? Well recently on the Dating and Relationship Show I spoke with former Real Housewives of Toronto cast member Ann Kaplan Mulholland about her love, family and career life!

After having the chance to sit down with Ann Kaplan Mulholland, she proved to Sandra and I that she is just as funny and glamorous as she is smart and successful! She showed up to our studio dressed to the nines and I asked her if she ever have a slummy day where she just wears jeans or track pants around the house? She said that she doesn’t even own jeans or sweat pants and she is always dressed up even around the house. Her reasoning for the extravagance is that she feels we only have one life to live so might as well live it big!

After mentioning her fashion choices around the house, Ann Kaplan Mulholland started to tell us about her family life at home. As some people may know, she has 8 children! Two are from her previous marriage, two are from her husband Stephen’s previous marriage, two they had together and two are her niece and nephew, which she took in after her sister passed away 3 years ago. With such a huge household and blended family dynamic I wanted to know how she manages it all. Ann told us that she actually has 4 staff members that help her manage the house. Her staff include; grocery shoppers, security personnel and general lifestyle managers to make sure everyone is taken care of and the house has peace and order. Ann Kaplan Mulholland told us that she only enforces two rules in her house, and that is: respect and safety. As long as everyone is following those two rules towards the house and towards each other, everything seems to run pretty smooth. But I needed to ask Ann, even with the staff’s help, what are the challenges that she specifically faces with raising so many kids? She simply responded ‘my challenge with having so many kids, is having so many kids!’ There has always been an issue with being outnumbered and making sure everyone is accounted for and happy. She shared with us that initially she faced some push back from her sister’s kids and overall; raising boys verses girls has its own challenges. Boys tend to be very assertive and you have to learn how to deal with that and with the age the girls are at she faces a lot of push back especially when it comes to fashion.

Ann Kaplan Mulholland certainly knows how to make sure her home is managed as well as her business pursuits, so I wanted to know, how does she keep her relationship with her husband Stephen so solid? They are coming up on their 17-year wedding anniversary and initially it wasn’t such a straightforward relationship. Ann told us that they met at a conference and Stephen chased Ann for about a year and a half before they finally got together officially. What is hilarious to know though, is that on their first date Stephen took Ann to KFC! But of course, Ann is a vegan so she couldn’t order anything from the menu, then they went to a Golden Griddle and Ann ended up eating crackers as her meal on their very first date. Sandra and I got a kick out of this, especially since it’s Ann so we knew she would be dressed lavishly even at a KFC. I asked if she was bothered by Stephen’s choice in restaurant and she said that as an ex-hockey player he is a fast food guy and she is never going to change that, so she just goes with it. That’s the biggest piece that seems to keep their relationship so strong after all these years – Ann doesn’t try to change who he is, she works with it. Smart! This way he is getting the love and admiration he wants while having no clue what’s going on in the background. Ann says, if you cant change them, manipulate them instead. Though that seems very sneaky, there is a lot of genuine love in their relationship as well.

Ann shared with us their key routines to keeping their bond so strong. She shared that they in fact have dinner together every night, no matter what. They either meet each other out for dinner or have a home cooked meal at their dinner table. They also keep a tradition of renewing their wedding vows every 5 years. She told us the story of how this tradition was initiated at a time they were going through serious financial and emotional hardships. There was an economic downturn, her sister had just passed away and her mother had just broken her neck and needed to move in with them. This put a lot of strain on their lives and relationship, so they decided to renew their vows to bring them back together and throw a huge party to celebrate their love. Ever since, they have kept the tradition alive because it brought them so much happiness and 5 years later on Stephen’s birthday, not only did they celebrate their love again, but Ann asked Stephen to marry her again. Since its initiation, this celebration in their lives has become so important in keeping their relationship strong.

Since we know Ann Kaplan Mulholland does it all, I wanted to ask her a bit about her business life as well. Ann told us that just recently she won the Canadian Entrepreneur of the Year award! She’s built her business over 22 years to a billion dollars worth of financing and through her success and influence has joined many charities to support causes related to AIDS research, women’s empowerment and mental awareness and support. She is a trailblazer and inspiration so I wanted to know what sort of advice she had for aspiring female entrepreneurs. She encourages businesswomen to set the bar high and to use what being a woman means to your advantage, such as intuition and heart. Be smart and know how to take control, you are just as smart and educated as the man next to you. Be a smart business person who has great ideas and knows how to execute; but just because of this gender evolution, don’t think of being a woman as your advantage, just know it’s no longer your disadvantage.

Ann Kaplan Mulholland is an inspiration in the areas of business, love, family and even fashion and was a true joy to be around. To listen to the full show and hear more about our discussion on her casting in The Real Housewives of Toronto visit www.640toronto.com. Want more dating and relationship advice? Buy my book for an inside look at how to find and keep your perfect match!