Why Elton John Signed my Back at the Fashion Cares Gala 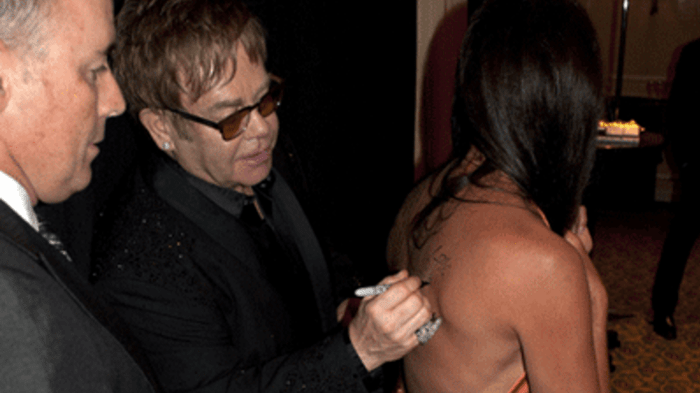 After we had photos taken together, I looked at Elton John and David Furnish (they were on either side of me) and said “can you guys do me a favour?” I took my Sharpie pen off the side table and said “can you sign my back?” They both did and, while Elton was signing, he said “well that’s a first.”

Going back (no pun intended), I had literally flown to Korea, Paris, London, New York and Italy in the month of August seeking the perfect dress for this gala. I bought a Christian Dior gown in New York (just in case) and had an elaborate dress made by Maurizio Pronto of Aquamarine in Italy (it was a gift from the designer). I returned from travels less than a week before Fashion Cares. At the last minute, I pulled a dress out of my closet and decided to go simple. It was an old dress, simple and backless.

When I pondered accessories, I thought “the purpose of my being at Fashion Cares is to launch the book, so I lucked upon a tattoo/makeup artist and requested he create a temporary tattoo. The tattoo had the information people would need to purchase a book at the event or thereafter. As my hair is long, I wore it down and pulled it around to the front to display my human billboard…it is beside the tattoo on my back where Elton and David signed their names.

When I returned to the cocktail reception I was introduced to Dean (or was it Dan?) of DSQUARED2. Of course I knew a lot about them from putting the book together and their initial and ongoing contributions to Fashion Cares. I have a lot of admiration for what they have done and their support. I still had a Sharpie in my hand. I asked him to sign…I couldn’t sum up the nerve to ask the other one later for his signature as they are identical, wore the same outfits and I was concerned I would approach the same one twice. So half of DSQUARED2 signed my back.

I was also asked to officially walk the red carpet. I had never done that in my life and knew it was a one time experience. Unfortunately, they don’t give you lessons. I wasn’t sure if I was to twirl, say something or stand there. The feeling of having all those cameras on me was surreal and for 30 seconds I felt like a princess. Then I walked off the carpet and back to reality.

The proto-type of the book I am producing on the 25 year history of Fashion Cares was on display for pre-order sales at the dinner with Elton John. People that donated a minimum of $2,000 to the Legacy Fund got their pictures in the book as part of the soon-to-be-competed 2012 chapter. This appeal was the last auction item where donors were asked to stand up and raise their paddles to indicate support. There was an incredible feeling of pride as people stood up. Those who gave money did not care if they were photographed, they were there to help. The book is all about that.

The book is not about one singular person. It is not about Elton John, the fashion, or those who wrote a cheque. It is about a whole community that collectively made a difference.

This book came about on the cusp of finishing my third book. John-Paul Ricchio of CTV popped by my office to chat (he is a friend). He was telling me about Fashion Cares and said it would be the last event after 25 years. I said “you should do a book.” He called me a few days later and said “the board approved for you to do the book.”

I thought it would go away. When I realized it wouldn’t, I hired an amazing team to grab quotes, pictures, garments from past shows, programs, news clippings, renderings, drawings…anything. Thousands of images later, a 480-page book was born. The last chapter to be 2012.

At first it was all business. I donated my time and all of the proceeds will go to the AIDS Committee of Toronto and the Elton John Aids Foundation. I had a mandate not to allow advertising, or to let any corporation or individual steer the content in any direction other than the truth.

I sifted through the quotes and images and created the story, year by year. Sometimes it was frustrating as a chapter would be completed and a new image would arrive that meant revisiting the past (again). One time I actually accidentally deleted an entire chapter from the main server — the Graphic designer, Aldo Buzzolini, wouldn’t speak to me.

For the month of June, Michael King plopped himself on the other side of my desk and tirelessly went through the chapters. He contributed an immense amount of time to the book. He would show up at about 10 a.m. each day with a cup of coffee for me and a smile. Such a dedicated and professional human being. We never really had a personal conversation, it was all about the book. I believe we worked well together as we are both incredibly picky and detailed oriented (sorry Michael). I must have made 1,000 revisions all to the “final” versions.

Then, Michael bounced into my office and announced that President Obama had provided a quote for the book (I think Michael is well connected). Michael read the quote to me. It was about contributing to AIDS Research. Without blinking I said “can you see if he will agree to add ‘and the book about Fashion Cares is a great contribution’?” Michael said he’d ask. Later, one of my staff said in a fit of laughter “you are so picky you even asked the President of the United States to correct his quote!”

Phillip Ing also came in to help. I had read so much about him, I expected a couture-clad, arrogant individual to show up (not that anyone said that, but he is deeply engrained in fashion and has so much clout). Instead, the most gentle, kind and simply dressed person become my go-to for facts. At one point, I emailed him a picture and said “is this the infamous Westwood dress?” He replied “no, that looks like something even Lady Gaga wouldn’t wear.” I think I turned as red as the dress.

We were under great pressure to finish the book on time. I was losing sleep. I literally ate, drank and thought about the book almost every moment. I would wake up and make notes. It became an obsession.

At one point I had an emotional breakdown: I was reading the umpteenth story about someone who had died of AIDS. In this story, the person was happy just to survive long enough to make it through the year to Fashion Cares. I burst into tears.

It was no longer business or a volunteer project. I was emotionally connected to the people who suffered and endured terrible loss, the prejudice and incredible discrimination. I felt an obligation to present the book as best I could and as beautifully as the hearts of the people that were, and are, behind Fashion Cares.

It became apparent that Fashion did, and does, care.