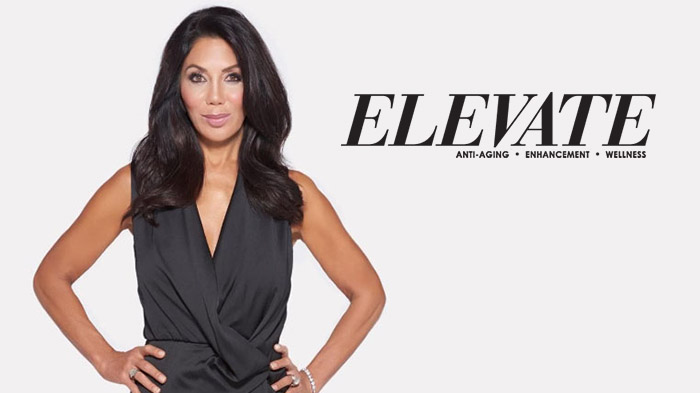 We interview Ann Kaplan Mulholland about her experience on The Real Housewives of Toronto and her memorable couture fishing ensemble.

The Real Housewives of Toronto (RHOT) is taking the city by storm. We’re hearing chatter everywhere as viewers weigh in on the latest Kara drama, dream about being at that killer dock party this summer or wonder what gossip will pop up next. One woman who seems to always rise above all the drama with a friendly smile and quirky humour is our girl Ann Kaplan Mulholland, luxury real estate proprietor and CEO and President of iFinance Canada Inc., parent company to Medicard. Ann is also a public speaker, television host, author and media personality and is married to Dr. Stephen Mulholland, MD, FRCSC, of one of Toronto’s top plastic surgeons.

We’re long-time fans of Ann’s here at Elevate and couldn’t wait to get in touch with her to chat a little more about her experiences on the show, how she managed to stay true to herself with cameras constantly pointed at her and whether or not Kara finally got the joke about Ann’s fishing ensemble.

Elevate: How were you selected for this show and why do you think they chose you?

Ann Kaplan Mulholland: I was going to be in a different show but was recommended an interview with The Real Housewives of Toronto. I wasn’t quite sure what it was about but I had a good idea. They asked me, “Why are you right for the show?” I said, “If you want someone who’s really smart and really funny, then I’m right for it.” If they were going to choose me, I wanted them to know who I was. If they wanted someone who was going to be screaming and yelling, that wasn’t going to be me.

AKM: I’ve done a lot of TV in my life, so I am used to the camera. I’ve been in television for a good portion of my career but this was very different, it’s reality television. It was an incredible experience and it was really fun. I got to know a lot of people and it opened me up to a world that I may have never been exposed to otherwise. Of course, when you’re being yourself and you like who you are, how easy is that? I don’t dislike me, so filming reality television came easily.

E: From what we’ve seen so far in the series, you seem to always rise above the drama. Was this difficult to do when you’re constantly being filmed, having your issues and reactions put on display?

AKM: You don’t have an opportunity to know what is going to happen when you’re being filmed, so you can’t filter how you’re going to react and you don’t get a second chance. Sometimes I was put in a situation in which I would not normally find myself in “real life,” but it is still real life. I was placed in some situations with some people that I would have to really just carry through with it when the cameras were rolling. Normally, my instinct would be to just walk away from those situations. I stayed completely true to myself throughout, but it was very, very different and very challenging to navigate through some situations.

E: You didn’t really know the other women before RHOT, but got to know them throughout the season. How did your relationships with these women transform by the end of filming?

AKM: Before we started filming, I had only met Joan and I found her to be very beautiful. She is a true lady and I have really enjoyed my friendship with her. Roxy and I have become very close as well. I got to know the other ladies along the way and I do like them all.

E: Now that you’ve completed filming, how would you reflect on the experience? Is it something you’d like to do again?

AKM: If I never was invited back, I would say that it was a great experience and I have no regrets. I was true to myself and however I am portrayed on the screen, so be it. There are times you watch and think, “Did I really say that?” But I had a great experience overall, and I would go back again if I am invited.

E: We have to ask, did Kara ever get your fishing ensemble?

AKM: Kara took it very seriously, but you have to have a little bit of fun in life. I don’t know for sure that she got it. If she’s been watching now and saw that episode, she knows it was a joke now but I can’t say for sure. You know, I had a lot of fun putting that outfit together. It was a very, very expensive fishing outfit when I was all done with it. The rod matched and even the line matched. For the record, though, I am a very serious fisher—you can tell by the outfit.

E: Do you find you have a little more celebrity status in Toronto now that the show is airing and is getting a lot of buzz?

AKM: What is interesting is that I get stopped by a lot of people now compared to earlier, as if you could draw a line in the sand between before filming and after it started airing. People recognize me now. They know my name and they see me as approachable. They’ll start talking to me about other people on the show and ask questions. They’ve done a good job of showing the personalities of each individual, because you can discuss Kara, Roxy, me or the other ladies and know what they’re like. It’s very, very interesting how we have become our own character.

E: We have to ask because everyone is thinking it: Is the show scripted?

AKM: So many people will ask me if the show is scripted. What you see is actually what happened; it was a real conversation. The fight in the dog park [between Kara and Roxy] is one example. I don’t think anyone could have scripted that. Did you see that? You can tell it’s not scripted. And if you read anything about the first procedure party, those women didn’t know that they were coming to see a facelift. That wasn’t scripted either. The show is reality. You do know that you’re being filmed because there are always cameras around, but it is not scripted at all.