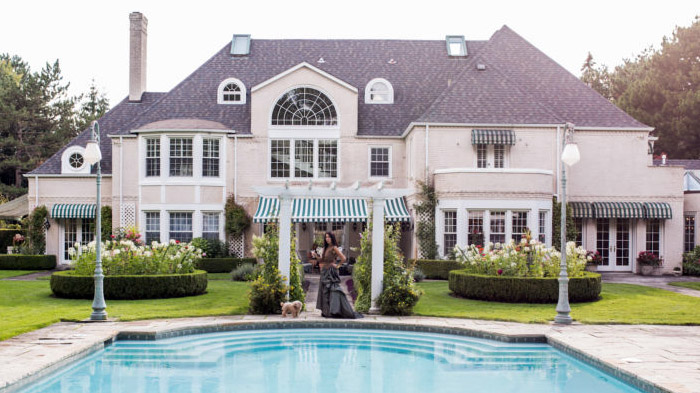 As glamorous as the Toronto International Film Festival may seem, there’s a lot of prep that goes on behind the scenes, particularly when it comes to your look. For a society columnist covering the party beat for the duration of TIFF, this means upping your game to keep up with the camera-ready A-listers who will be surrounding you at various events, parties and premieres.

So when I got the chic invite to get glam for TIFF “like the rich and famous” at Real Housewives of Toronto‘s Ann Kaplan’s mega-mansion, I felt immediate relief and excitement. Services included your usual manis, makeup applications and blow-outs, but also on the beauty menu was lip injections, botox and chemical peels.

Bubbly and botox compliments of one of the city’s most put-together women? Don’t mind if I do.

Not going to lie, I’ve never been invited to a soiree boasting services that usually happen behind closed doors (let alone, discussed), so I was intrigued to see how far some people would go to get the right look. The invite said to RSVP with a selection of three services from the menu. For the past week I debated getting lip injections because Kylie Jenner will forever be my muse, but I wimped out and went basic bitch with a mani/hair/makeup trifecta.

I was first to arrive at Ann’s Gatsby-like gated Bridle Path home (which is two doors down from where Drake’s abode-to-be is being built, btw) and air-kissed Ann who was sitting in a lavish dining room getting her hair blown out. I was then escorted into the kitchen to the sound of a bottle of 2006 Dom Perignon being popped. A flute was filled and handed to me before I entered an all-wooden mahogany library to get my nails done by the people behind Her Majesty’s Pleasure.

As they were going at my nails, fellow party beat journalist, Sabrina Maddeaux, sat beside me to get hers done as well. While talking about the news of the day (that Vanity Fair cover story on Meghan Markle) I realized I’ve never had such a relaxing afternoon in a long time. To sit next to a journalist who covers the same beat as I do for a competing publication and to just unwind and talk was refreshing. It wasn’t lost on me that Ann brought us and a few fellow friends from the field together in a girl power kind of way.

When I went to the dining room for my blow out, I let Vidal Sassoon’s Creative Director, Wesley Hanlon, choose how he wanted to do my hair. He’s the expert, and somehow he transformed my meh, dead-end ridden locks into a Brigitte Bardot look. I may or may not have told him that he was a goddamn wizard and stored his digits into my phone to make an appointment with him for some of the upcoming fetes I’m covering.

Before walking into the open kitchen where makeup artist Joanne Parks was set up and waiting for me, I looked past the long hallway into the living room, just in time to see a dermal filler c/o SpaMedica being injected into a pretty young thing’s face. But I won’t say whose, because I’m a lady. Needless to say, her pout was perfected and I’m sorta, kinda regretting not getting mine done. After saying so to Joanne, she worked wonders on my face (she came clad with an airbrush machine to cover my visage, making my bags disappear) and outlined my lips outside of my natural lip line to make them look way more full then they’ll ever be.

As I got my makeup done and debated which dress to wear to the event I was running off to, Ann sat with me and filled me in on which events she’d be hitting up, and about how lovely the day was, even for her. Her kids came home from school, her dog was on her lap and she truly made me feel at home. It was a nice escape for the day, and before I whisked off, she ordered a car for a girlfriend and me to ensure we got to our event swiftly and safely. Now I’m just waiting for an invite from her for a day to get pampered and to unwind after TIFF.